A great book designed for the contemporary anthropology classroom.

Research – meeting people, talking to them, working with them, interviewing them – is what anthropology is all about. Socio-cultural anthropology draws upon friend-like relationships to reconstruct detailed understandings of small groups of people. Whereas survey research, for example, paints broad brush pictures of large groups of people, anthropology focuses on long term relationships. The survey approach might give one a lot of superficial details about a large number of people. Anthropology, however, gives one rich detail about a small number of people. Both views have advantages, but for me I am more inclined toward long-term relationships than the one-night stand of large-scale surveys. At the heart of the anthropological endeavour is a desire to make sense of our world through long-term, intimate social relations. There are certainly many types of anthropological research. Nonetheless, and despite all of our differences, all anthropologists share a desire to learn about real people and to apply the knowledge we gain to making our common world a better place for all.

This edited collection had its roots in a circle of friends and colleagues studying at the City University of New York’s Graduate Center in the mid-1990s. As we were making the transition from students to teachers we felt the desire to have teachable case studies that dealt with real problems that our mostly urban students would relate to. Anthony Marcus, the editor of the first edition of Anthropology for a Small Planet, took the initiative and organized the first volume. Marcus wanted clearly written and engaging articles that demonstrated anthropology in action. Between the publication of the first and second editions Marcus and Menzies, in collaboration with Katherine McCaffrey and Sharon Roseman, founded the journal New Proposals. The journal is an attempt to explore issues, ideas, and problems that lie at the intersection between the academic discipline of social anthropology and the body of thought and political practice that has constituted Marxism over the last 150 years. The University of British Columbia in Vancouver, Canada hosts our journal, which is an experiment in open access publication.

The second edition of Anthropology for a Small Planet blends together four of the original articles with five published in New Proposals. Each essay was selected for its relevance for learning about how to do anthropology that makes a difference in our world. Too often our academic studies focus on pointing out everything that is wrong but ignore what can actually be done or deny the reality of the world that most people live in. That’s not the case here.

This is a great book for introductory anthropology classes.  The case studies are readable and engaging.  Individual orders can be made via our paypal system.  For bulk orders contact us directly at New Proposals Publishing 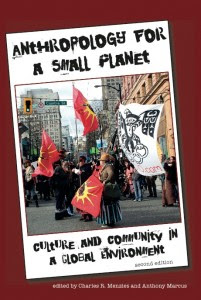 New Proposals is a journal of Marxism and interdisciplinary Inquiry that is dedicated to the radical transformation of the contemporary world order. We see our role as providing a platform for research, commentary, and debate of the highest scholarly quality that contributes to the struggle to create a more just and humane world, in which the systematic and continuous exploitation, oppression, and fratricidal struggles that characterize the contemporary sociopolitical order no longer exist.